Salamanders are considered as the least harmful creatures such that they are use as pets at different places. However this has not always been the case. 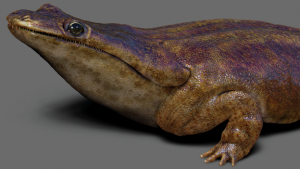 Very recently fossils was uncovered reveals a relative of the salamander called Metoposaurus algarvensis that lurked in the waters of Portugal some 230 million years ago that was the size of a small car. This monster amphibian was so ferocious that it snacked on some of the first dinosaurs.

“This new amphibian looks like something out of a bad monster movie,” Steve Brusatte of the University of Edinburgh’s School of GeoSciences said in a news release. “It was as long as a small car and had hundreds of sharp teeth in its big flat head, which kind of looks like a toilet seat when the jaws snap shut.”

While Metoposaurus lived on a diet of mostly fish, the 6-foot-long, 200-pound Triassic ancestor of today’s salamanders and newts could also eat anything else that came over to the water for a drink.

“Like people down in Louisiana or Florida today: ‘Stay away from the water or the crocs might get you!’ Brusatte told the BBC. “I think that’s what it would have been like with the earliest dinosaurs.”

The remains of about 10 of the newly discovered species were found in a dry lakebed in Portugal, according to research reported this week in the Journal of Vertebrate Paleontology. Similar amphibians have been identified from the same period around the world, but this species is the first of its kind uncovered in the Iberian Peninsula.

“Most modern amphibians are pretty tiny and harmless,” said Richard Butler of the University of Birmingham’s School of Geography, Earth and Environmental Sciences. “But back in the Triassic these giant predators would have made lakes and rivers pretty scary places to be.”

The monster salamander was wiped out during a mass extinction 201 million years ago as the Pangea supercontinent broke apart. The event killed off many types of vertebrates, including big amphibians, and eventually allowed dinosaurs to dominate the planet.

“Out of the ashes of that extinction that dinosaurs and mammals made it through,” Brusatte told the Washington Post. “All of this stuff is related. These amphibians had their day.”

Which dark material passed our galaxy, has excited Scientists