Inflation Rate went up to Zero in February in U.K

This happened in almost after a long time (around 55 years). The consumer prices have failed to achieve growth in yearly terms in the month of February. The annual inflation rate was flat, said the Office for National Statistics, after rising 0.3% year-on-year in January. This was the weakest annual inflation rate recorded in historical estimates since March 1960 and the first time prices in the U.K. haven’t risen since official records began in 1989.

Keeping prices in check once again was the decline in the cost of oil and other commodities in the international markets. Both the price of fuels and lubricants and that of food and nonalcoholic beverages posted their sharpest annual drop on record.

This leads economists to believe inflation in the U.K. is likely to turn negative soon. Although policy makers across the globe have gathered forces to fight deflation—a broad fall in prices which drives households to hoard money instead of spending it—the Bank of England has so far expressed confidence inflation will return to its 2% target in the medium term. BOE Governor Mark Carney recently confirmed interest rates are still set for a gradual rise over the next three years and investors expect they will start to go up in the first half of 2016.

The central bank agrees with most analysts, who believe British consumers see weaker prices only as a temporary windfall. A brief spell of cheaper oil is likely to make businesses and households in the U.K. feel richer and ramp up spending instead, economists say, improving the outlook of the U.K. economy during the first quarter of 2015.

“Today’s zero inflation is the right sort of price freeze, with low oil prices feeding through to prices,” the number two in the U.K. Treasury, Danny Alexander, said in a statement. “It’s yet another month that sees earnings pulling ahead of prices, which will be a great help to millions of families.”

Prime Minister David Cameron is keen to see living standards improve ahead of what polls say will be a closely-fought general election in May. Although the British economy finished 2014 as a top-performer among western industrialized nations, Mr. Cameron’s Conservative Party—currently in a coalition government with the Liberal Democrats—has been under fire by the main opposition Labour Party for failing to boost earnings. But in the final quarter of the year low inflation allowed wages to rise in real terms for the first time since 2008.

However, some policy makers are concerned that the strength of the pound, which is rising against other major currencies and reduces the price of imports, could subdue inflation for longer. Minutes of the last meeting of the Bank of England’s rate-setting body showed the nine-member committee believes a stronger currency could prolong the period of weak prices and “exacerbate the risk that lower expectations of inflation might become more persistent.”

The pound has surged against the euro since the single currency area unleashed its own plans to ward off deflation—consumer prices dipped an annual 0.3% in the eurozone in February—which is seen by European officials as a symptom of economic weakness. The European Central Bank announced in January a new scheme to buy €60 billion ($65 billion) a month worth of government bonds, a policy known as quantitative easing, to fan inflation and stimulate the economy. The central bank’s purchases are designed to make safe sovereign debt more expensive, squeezing their yields and forcing investors to move to riskier assets, such as corporate bonds or equity, which might provide companies with cheaper money and encourage them to invest.

In a testimony in front of the European Parliament Monday, ECB President Mario Draghi confirmed the central bank’s willingness to continue expanding its balance sheet until annual inflation returns to its official target—close but below 2%. The ECB’s commitment to economic growth has already bolstered the 19-nation eurozone bloc’s prospects: consumer confidence in the eurozone jumped to its highest level in more than 7 year in March, official figures showed Monday, and preliminary data suggests economic growth in the single currency area is edging up.

But the upward pressure on the exchange rate could have consequences for Britain if a longer-than-expected period of subdued prices delays the tightening of monetary policy. BOE chief economist Andrew Haldane said last week chances of the next rate move being a rise or a cut were “broadly evenly balanced,” echoing the risk weak inflation may become entrenched. 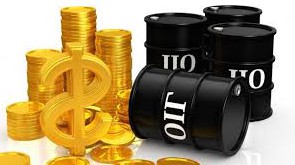 Fluctuating Oil futures much ahead than U.S. stockpile data

Crude oil futures seemed to be quite irregular in the trade market this Wednesday, it …