Tesla CEO: Driverless vehicles will be breakthrough in Auto Industry

Tesla Motors co-founder Elon Musk believes the success of driverless vehicles will be breakthrough in their business, which is presently a successful start-up in electric automaking. 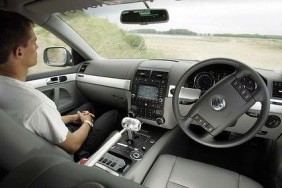 The Tesla chief executive believes that the autonomous age is coming fast, with self-driving cars a given fact in a short period of time and his company has every intention to be one of the segment’s rising leaders. “Tesla is the leader in electric cars but also will be the leader in autonomous cars, at least autonomous cars that people can buy,” commented Musk. “We’re going to put a lot of effort into autonomous driving. It’s going to be the default thing, and it will save a lot of lives.” His comments came amid a discussion with Nvidia Corp. CEO Jen-Hsun Huang who called him to speak about driverless cars and artificial intelligence at the start of the graphics-chip maker’s GPU Technology Conference in San Jose, California on Tuesday. Nvidia – a well known provider of powerful computer graphics chips – has recently entered the business of computing power for car infotainment systems, including the one currently found Palo Alto, California-based automaker’s Model S sedan.

The auto industry is now rapidly adjusting to try and catch up to the fast moving consumer electronics market and Nvidia’s computer chips and software give automakers the ability to rapidly update and customize in-car technology such as navigation systems and instrument displays. Musk has recently announced in a tweet that its fleet of Model S sedans will receive an over-the-air update that will bring new enhancements, with more details to be revealed on Thursday.

Previous Oil falls to Six-Year Low as U.S. Stockpiles fell at the same time
Next Wage Increase might push through because of Closed Restaurant

Just days prior to the launch of HTC M9, CEO Peter Chou steps down from …