FedEx sees Surge in Earnings because of shipping giants’ move

FedEx Corp: Courier delivery services company, Said that around 53% increase in earnings was achieved during the holidays. The increased is the result of lower fuel costs, milder weather and shipping giant’s recent restructuring moves. 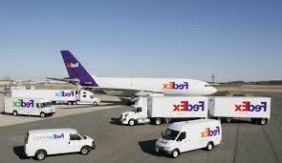 FedEx shares, up 27% over the past year, slid 1% in premarket trading as the company’s February quarter revenue and its earnings outlook for the current fiscal year fell short of expectations.

With more than 600 aircraft and 90,000 vehicles, FedEx has benefited from falling fuel prices. The company’s restructuring of its air-express division has also helped drive higher profits. Those measures include modernizing its air fleet to improve fuel efficiency and offering buyouts to about 3,600 employees, who have since left the company.

In addition, this year’s milder weather was a boon. Last year’s severe winter weather shaved off $125 million from FedEx’s operating income, executives said at the time.

For the third quarter ended Feb. 28, FedEx posted a profit of $580 million, or $2.01 a share, up from $378 million, or $1.23 a share, in the year-earlier period. FedEx said its stock buybacks over the past year boosted its third-quarter per-share earnings by 11 cents.

“We had a very successful peak season as volumes grew across all transportation segments,” Chief Executive Frederick Smith said.

For the fiscal year ending in May, FedEx narrowed its per-share earnings range to between $8.80 and $8.95, from its previous forecast of $8.50 to $9. Analysts, on average, were expecting earnings of $8.97 a share, according to Thomson Reuters.

In the February quarter, the company’s biggest segment—express—saw sales slip to $6.66 billion from $6.67 billion the year earlier. However, domestic package volume grew by 4%. Despite the essentially flat revenue, margins more than doubled because of lower costs.

Revenue in the ground segment increased 12% to $3.39 billion on a 7% jump in average daily package volume. The segment has benefited from growth in e-commerce in recent quarters and from higher base rates.

FedEx said its freight segment’s revenue grew 6% to $1.43 billion, as shipments for the less-than-truckload operation increased 3%.

In January, rival United Parcel Service Inc. reported it spent an unexpected $200 million extra over the holidays as it hired too many people for fewer-than-expected packages, resulting in a drop-off in productivity.

Amazon Inc. has recently released its first quarter earnings this year. Sales in this quarter …