Contrary to name, Diet in Diet Soda is not true, Study say

Older adults who drink diet soda may get fatter compared to the adults that only drinks water or any kind of health drinks.   The diet in “diet soda” is not true. 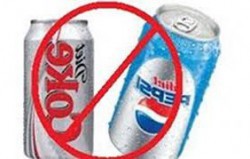 Increased belly fat, which is usually what causes increased waist circumference, may raise people’s risk of cardiovascular disease and other health issues because it increases inflammation, Fowler said.

The new study adds to a growing body of research on the potentially harmful effects of diet soda on human health. In a study presented in 2011 at the American Stroke Association’s International Stroke Conference in Los Angeles, researchers found that people who drink diet soda every day may have an increased risk of stroke and heart attack. In another study, published in 2012 in the Journal of General Internal Medicine, investigators also found a link between daily diet soda consumption and stroke, heart attack and death from these two conditions.

Moreover, the authors of a study presented at the American Academy of Neurology’s annual meeting in San Diego in 2013 found a link between drinking diet soda daily and an increased risk of depression.

In the new study, the researchers said that it is not clear exactly why drinking diet soda may be linked to an increase in waist circumference. But it may have something to do with the sweeteners used in diet soda, and the way they may affect food-intake regulation, Fowler said.

For instance, in a study of mice that were exposed in utero to high levels of one such sweetener, aspartame, researchers found that the sweetener caused lesions in the brain region that normally receives the so-called “quit-eating” signal, Fowler said. As a result, the mice had more abdominal fat when they grew up, she said. Sweeteners used in diet sodas may have a similar effect in people, although more research is needed to see whether this is the case.

Fowler suggested that people use strategies to reduce or quit drinking diet soda, considering its potential negative effects on health.

“The more people can try to duplicate some of the things they love about diet sodas with something else that is really a whole food, the better,” Fowler told Live Science.

For instance, if someone likes the sweetness of diet soda, eating some sweet fruit and chasing it with regular or sparkling water may be a good substitute, Fowler said. Or, for diet-soda drinkers who appreciate the caffeine, then replacing diet soda with coffee or tea could work, she added.

The new study was published on March 17 in the Journal of the American Geriatrics Society.

Previous Tesla announces selling cars directly in New Jersey
Next Luxembourg in the middle of dilemma, the end of bank secrecy

Most Parents use social media to tackle child health