At least 20 people have been killed in Tunisia’s capital when three gunmen stormed a popular museum. However, the security forces have recaptured the place and two attackers have been killed. One gunman has also been detained, says Tunisian Foreign Minister Taieb Baccouche. 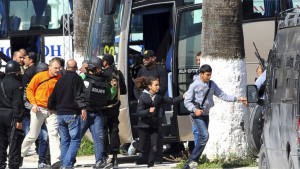 Among the 20 killed, seventeen are tourists.

About 200 tourists were visiting the Bardo National Museum, located near Parliament in central Tunis, when the armed men charged into the building, an interior ministry spokesman said. Besides the 17 tourists, one museum staff member was killed. A Tunisian security officer was killed in the firefight when police stormed the museum.

Security officials and two lawmakers said the gunmen had initially targeted the Parliament but were prevented by officers on the scene and quickly changed their target to the nearby iconic cultural site.

The prime minister said the tourists hailed from Spain, Poland, Germany, Japan, South Africa and Italy, adding that most were able to escape with the help of security forces.

Although there was no immediate claim of responsibility for the attack, French President François Hollande drew parallels between Wednesday’s violence in North Africa and the terror attacks that have shaken the capitals of France and Denmark in recent months.

“We are all affected. That is as true in Tunis today as it was in Copenhagen,” Mr. Hollande said.

Wednesday’s attack on one of Tunisia’s most popular tourist sites sent tremors of fear through the capital. Tunisia has made a largely successful democratic transition since a popular revolt unseated the longtime autocratic regime of Zine El Abidine Ben Ali in January 2011.

‘Everyone Behaves Better’ when police use body cameras according to study

U.S. — Recent chaotic and hurtful situations between police and citizens have caused greater use …